from harbour industry to residential area, and the crucial role of squatters in this transition

A part of Amsterdam that is not very well known, though very interesting and characteristic is the Java-eiland in the Eastern harbor area of the city. Nowadays, the Java-eiland is a residential area, but it did not always have a residential destination. Until the 1980s, the area used to be intended for dock labour. In this Collecting the City project, we examine the history of the area, the transition from harbour to residential area. We let the people who are responsible for this development share their stories and present residents tell about how they experience a sense of history in their home area.

The first story that is important within the history of this area concerns ‘Het Einde van de Wereld’ (English: The End of the World). Het Einde van de Wereld used to be a harbor building on the Sumatrakade that was squatted in 1984. For over ten years, squatters and creatives lived in this building and ran a restaurant that was famous in the whole city of Amsterdam and beyond.

''It was always nice and colourful there, in contrast to the gray weather outside.''

After visiting Claud, we continued our way from the Javakade to the Azartplein. The Azartplein was named after a theater group called Azart. Led by August Dirks, the theater group travels the world by boat, the Ship of Fools, but regularly returns to Amsterdam.

The Wladiwostok-building, a large and stately building, immediately draws attention when you arrive at the square. The building was designed in collaboration with the residents association of the Java-eiland. Former squatter Siem Goede, who also lived at the old Einde van de Wereld building, is an architect and he used to be a member of this association. He committed himself to giving the square the appearance it has nowadays: with several elements that remind of the past of this area. After the redevelopment of the Java-eiland, Siem moved from Het Einde van de Wereld to the Wladiwostok-building and he has lived there ever since. The living principles in the Wladiwostok-building somehow still remind of the precepts of the former squatters in this area.

Our third and last stop is at the Azartplein as well. It is the only building that was not demolished during the redevelopment and therefore the only ‘authentic’ building on the square: the SHB-building. SHB stands for Samenwerkende Haven Bedrijven (English: Cooperating Harbor Companies). In this building, the salary administrations were kept, and dock workers also received their salary here. Due to decreasing activity in the harbour industry, the building became vacant in the 1970s. In 1982, it got occupied by a group of squatters and creatives, looking for a home. The building got a refurbishment in the 1990s, for which the design was made by Siem Goede. After that, several squatters from the first hour still live in the building up till today.

One of the residents of the SHB-building was kind enough to share her living experience with us. Leonie Klooster lives in the building for about ten years now, and thus is not one of these first residents. Nevertheless, she is very well-aware of the history of her neighbourhood, and her older neighbours are happy to share their stories with younger residents. Leonie tells us about her living experience in a place with a rich history like the SHB-building.

''If this place would not have a history in which squatters were involved, I think it would look differently nowadays'' 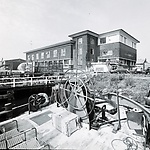 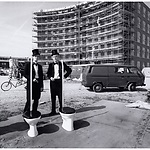