The open boat passes under a bridge where black and white bodies stand - canal houses painted on their backs. A black actor and a white actress share the story of an hotel on Kloveniersburgwal, once the house of slave-owners, in a poetic dialogue connecting past and present. In the boat we take part in Sites of Memory, a theatrical tour of black Amsterdam history, created by students of the Amsterdam theatre school (third year), theatre group Untold and (amateur) performers.

Katy Streek of Afrovibes went on a Black Heritage Amsterdam Tour with Jennifer Tosch some time ago. This should be a play’ she thought. The Amsterdam Slavery Heritage Guide, written in 2014 by Jennifer, Dienke Hondius, Nancy Jouwe, Dineke Stam and me became the starting point of this location theatre project. Students were given the book, they chose a location and developed the theatrical tour together with Jennifer, director Katy Streek and dramaturge Maarten van Hinte (Rightaboutnow.inc.). I was moved to see what they had created out of our short descriptions of over a 100 locations connected to slavery and black presence in Amsterdam. Here you can see a short video of the theatrical tour.

At the gate with the skulls near the Zuiderkerk we experienced the first theatrical intervention in public space. Actors stopped us and measured our heads, just like Petrus Camper (1722-1789) did when he measured heads and skulls to see it there was a difference between black and white humans. He found no difference beneath the skin.

From now on, superimposed over the square next to the Zuiderkerk will be the images and sounds of the actors running up to us, looking with fear and amazement at us, the strangers. Standing on this former graveyard of the Zuiderkerk Jennifer had told us about the small black community living in Amsterdam in the seventeenth century. Some of these free black men and women were neighbours and probably models of Rembrandt.

‘We don’t deny, we question and we dig’ is the motto of the play. No re-enactment of history but beautiful images, movements and texts. Two actors carry a body that is dragged out of the water, representing of the 664 African prisoners on the slave ship De Leusden who were drowned on the Surinam coast in 1738. Only one of the audience members on the boat more or less knows the story of the biggest shipping disaster in colonial times: the crew locked the African in the ship’s hold, when De Leusden was sinking. The scene takes place near the Kromhout wharf, not far from where the Leusden was built in the 18th century. On a bridge hangs a banner with the words gevoelige schade. They refer to the meeting of the West India Company of 20 May 1738, when the message about the disaster had reached Amsterdam. ‘Considerable damage to the Company’, according to the minutes, dug up by Leo Balai in his thesis about the Leusden.

The wound has been deep

Near the Maritime Museum Vanessa, one of the Untold dancers, performs her beautiful movements while students recite lines from a Maya Angelou poem through a megaphone. ´The night has been long/The wound has been deep/The pit has been dark/and the walls have been steep’. Another sentence that will haunt me, whenever I will pass there in the future. Some actors contributed their own experiences. Frederick, an Haitian artist sang an Haitian song for the ancestors at the  scene with the drowned people. ‘Haitian voodoo is like winti’, he says when we start talking after the performance. ‘Voodoo, like with the dolls and needles?’ asks one of the theatre students. ‘No that’s the Hollywood image of voodoo’.

In a very short period  the students, actors and dancers of Untold have created the tour. Afterwards we stepped ashore, we sat on a terrace in Jodenbreestraat and talked about the process. When the students – all white – met the black performers of Untold for the first time, there were some tense moments. ‘We are not going to play the slaves’  the Untold actors told Jennifer. ‘Don’t worry’ she told them, ‘they have come up with more layered interventions’.

I am always curious how the creative process works. I ask one the students who performs in front of the hotel about her robe made of thin white plastic. To me she felt like a ghost from the past. She explains how it started with an image of covered furniture in an empty house. ´It can be anything, some people see a bride, which is also fine. The woman on Kloveniersburgwal was a gold digger after all, marrying rich men who owned plantations in Surinam.'

In Between the World and Me (2015 ) Ta-Nehisi Paul Coates writes to his teenage son: ‘You must always remember that the sociology, the history, the economics, the graphs, the charts, the regressions all land, with great violence, upon the body.’ I am happy that Amsterdam’s dark past is now embodied in Sites of Memory. Hopefully many more people will have a chance to experience this play rooted in our shared history. 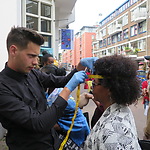 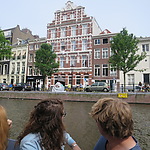 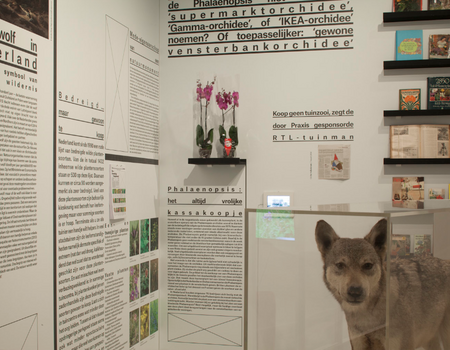 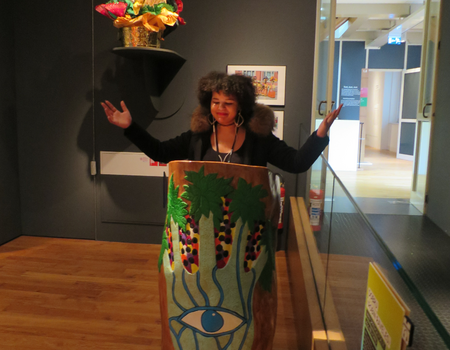 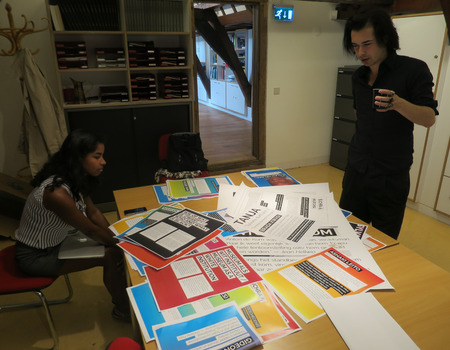 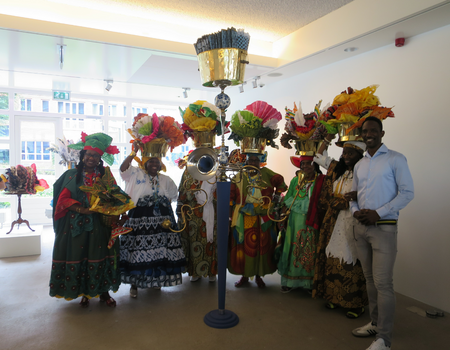 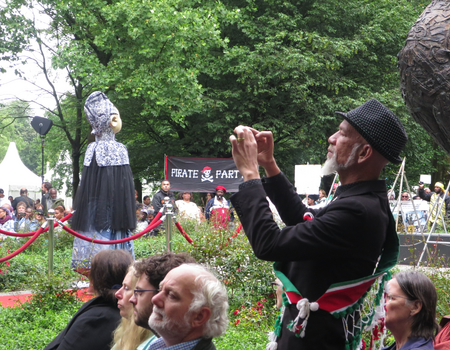